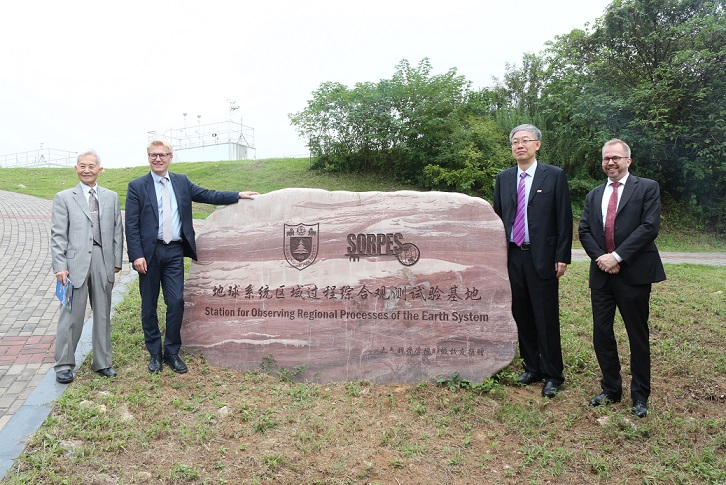 A Finnish delegation of more than 20 members led by Kimmo Tiikainen, Minister of Environment, Energy and Housing, paid a visit to NJU on Sept. 14 in the company of Jan Wahlberg, Finland’s consul general in Shanghai.
The delegation visited the Joint International Research Laboratory of Atmospheric and Earth System Sciences, and learned about the progress in the China-Finland international cooperation project. President Jian Lyu warmly welcomed the guests at Xianlin Campus, and accompanied Minister Tiilikainen at relevant reports and on the visit to the Station for Observing Regional Processes of the Earth System-SORPES. 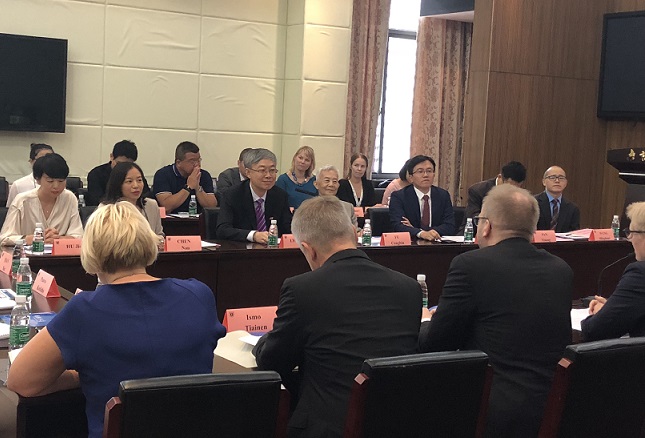 Prof. Congbin Fu, academician of the Chinese Academy of Sciences and foreign member of Finish Society of Sciences and Letters, Xisheng Xu, director of the Office of Science and Technology, Jie Hu, deputy director of the Office of International Cooperation and Exchanges, principal personnel and teachers’ representatives of the School of Atmosphere Sciences and the Joint Laboratory, and representatives of main organizations involved in the China-Finland cooperation project were present.
President Jian Lyu introduced the history and talent cultivation of NJU, and reviewed the cooperation with universities in Finland such as University of Helsinki and University of East Finland on Atmospheric and Earth System Sciences, environment and other fields. Lyu particularly appreciated the long-term cooperation with the team led by Prof. Markku Kulmala, academician of the Academy of Finland and foreign member of the Chinese Academy of Sciences. Aijun Ding, dean of the School of Atmosphere Sciences and executive director of the Joint Laboratory, gave a report on the major progress of the laboratory since its foundation, with emphasis on the research progress of SORPES which was jointly-built by China and Finland. Prof. Aijun Ding also presented the major research results on the different forming mechanisms and climate effects of aerosol in China and Finland, the interaction of physical process and chemical process subject to the climate and environment in China, and the prevention and cure of compound atmospheric pollution in Eastern China and its achievement transformation. Next, Hannamari Jaakkola from Vaisala introduced the research progress of the China-Finland cooperation project on the air quality in Nanjing, which was invested by TEKES and Jiangsu Science and Technology Department. 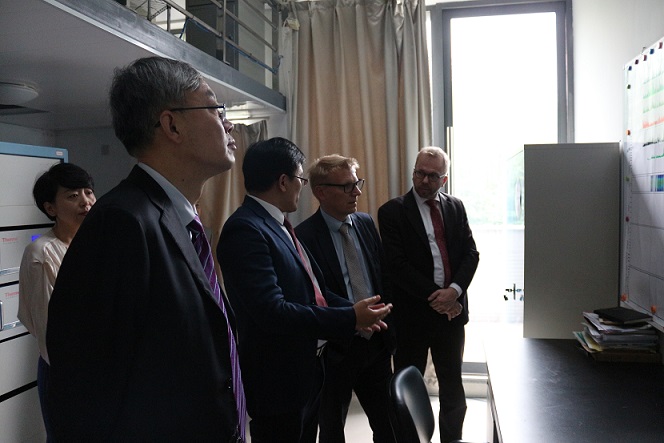 Minister Tiilkainen expressed admiration on the close cooperation among NJU and universities in Finland on atmosphere environment. He spoke highly of the long-term cooperation of academician Congbin Fu, Prof. Aijun Ding’s team and academician Kulmala’s team in founding the high-level Joint International Research Laboratory, as well as a series of influential scientific achievements on the atmospheric compound pollution in Eastern China. He noted that cooperation at a deeper level will be promoted on the prevention and control of atmospheric pollution (including indoor air pollution).