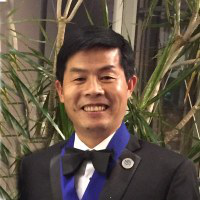 The American Geophysical Union (AGU) announced its 2018 Fellow a few days ago, and Alumnus Fuqing Zhang of the Class of 1991, from the department of atmospheric sciences, who is now a professor of the Pennsylvania State University, was elected for fundamental understanding of multiscale predictability and dynamics and for breakthroughs in hurricane prediction through ensemble data assimilation. The AGU was established in 1919 and is one of the most prominent organization in the fields of Earth and space sciences. Since the AGU Fellows program was established in 1962, no more than 0.01 percent of the total membership of AGU is recognized annually to commend them on their exceptional research contributions in the Earth and space fields.

Professor Fuqing Zhang received his M.S. degree from Nanjing University in 1994 and obtained his Ph.D. from the department of Atmospheric Science at North Carolina State University in 2000. He is a tenured professor at the Pennsylvania State University and also the founder and director of the Penn State Center for Advanced Data Assimilation and Predictability Techniques. His research specialties include mesoscale dynamics, data assimilation and severe weather and regional climates. He has made significant contributions to the analysis and prediction of hurricanes and mesoscale weather with radar and satellite observations ensemble-based data assimilation methodologies. He has authored over 200 peer-reviewed journal publications.

In the last decade, Professor Zhang's prominent scientific achievements were widely accepted and won him many honors and awards. In 2009, he was the sole winner of the AMS Clarence L. Meisinger Award for outstanding contributions to mesoscale dynamics, predictability, and ensemble data assimilation. In 2014, he was presented the Banner I. Miller Award 'for valuable insights into incorporating real-time airborne Doppler radar measurements via ensemble data assimilation, leading to improvements in forecasts of tropical cyclone track and intensity'. In 2015, he was elected a fellow of the American Meteorological Society.