On April 2, the Proceedings of the National Academy of Sciences of the United States of America (PNAS) published the article Ammonia emission control in China would mitigate haze pollution and nitrogen deposition, but worsen acid rain (https://doi.org/10.1073/pnas.1814880116), which is the collaborative work of Prof. Aijun Ding and Associate Prof. Xin Huang in our department and the College of Environmental Science and Engineering of Peking University. This article shed some new insights of the role of ammonia reduction in air pollution control.

Ammonia is the most abundant alkaline gas in the atmosphere and plays a vital role in the atmosphere and ecosystem. On the one hand, ammonia gas can promote the formation of sulfate and nitrate and increase the concentration of fine particulate matter (PM2.5). On the other hand, it can neutralize atmospheric acidic substances and hence weaken the impact of acid rain on the ecological environment. Intensive nitrogen fertilizer application and agricultural activities such as animal husbandry make China one of the regions with the highest ammonia emissions across the world. Associate Prof. Huang has established a high-resolution ammonia emission during her Ph.D. study in the College of Environmental Science and Engineering, Peking University. It has been introduced into the MEIC inventory database for Asia and became the most widely used ammonia in China. This work was published in the Global Geogeochemical Cycles in 2012 and was the most cited one since then, which was also highly-cited paper according to Essential Science Indicators.

Given the important role of ammonia in particle formation, ammonia emission reduction has been recently proposed as a strategic option to mitigate haze pollution. However, considering large amounts of sulfur dioxide and nitrogen oxides from fossil fuel, ammonia reduction may exacerbate ecological and environmental problems such as acid rain, and there is currently no quantitative analysis of this complex effect. Therefore, based on ammonia flux observation and self-developed ammonia emission model, combined with three-dimensional air quality numerical simulation, China's ammonia emission reduction potential was comprehensively investigated by this PNAS paper, highlighting its complexity of fine particle pollution, nitrogen deposition and acid rain.

Previous study (Huang et al., 2012) has shown that China's high ammonia emissions are mainly caused by extensive agricultural activities. In this study, by integrating a chemical transport model with a high-resolution emission inventory, this paper indicated that ammonia emission abatement can mitigate haze pollution and nitrogen deposition but would worsen acid rain in China. A 50% reduction in NH3 emissions achievable by improving agricultural management, along with a targeted emission reduction (15%) for sulfur dioxide and nitrogen oxides, can alleviate PM2.5 pollution by 11−17% primarily by suppressing ammonium nitrate formation. Meanwhile, nitrogen deposition is estimated to decrease by 34%, with the area exceeding the critical load shrinking from 17% to 9% of China's terrestrial land. Nevertheless, this ammonia reduction would significantly aggravate precipitation acidification, with a decrease of as much as 1.0 unit in rainfall pH and a corresponding substantial increase in areas with heavy acid rain. An economic evaluation demonstrates that the worsened acid rain would partly offset the total economic benefit from improved air quality and less nitrogen deposition. After considering the costs of abatement options, a region-specific strategy was proposed for multipollutant controls that will benefit both human and ecosystem health. 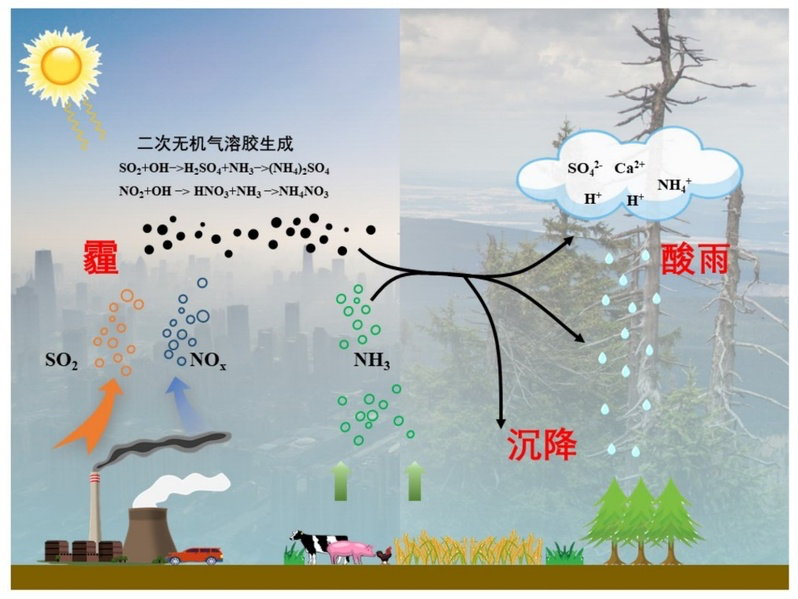