Extreme summer heat-wave events in eastern China have happened frequently in recent years, posing a severe threat to public health and social activities, as a result, the variation mechanism of summer heat waves in eastern China has drawn an extensive attention. The western Pacific subtropical high (WPSH) is regarded as the key circulation system that dominates the summer heat waves over eastern China, and many studies have ascribed the extreme summer heat-wave events to a stronger WPSH. There are some evidences indicating that the interannual WPSH-heat wave relationship may not be stable. For instance, the WPSH in the summer of in 2010 was the strongest since 1959, while the number of heat wave days in eastern China was closer to the climatological mean; in the summer of 2013, the intensity of record-breaking heat waves over eastern China was the strongest since 1959, accompanied with a stronger and westward extending WPSH.

Heat waves over eastern China and WPSH both exhibit significant interannual variability. By comparing of the number of summer heat wave days and WPSH intensity (WPSHI) index over the period of 1959-2016, we found that the correlation between summer heat waves and WPSH interannual variability is modulated by PDO. The correlation coefficient between the WPSH intensity (WPSHI) and the number of heat-wave days (NHD) was 0.65 (>99% confidence level) during positive phases of the Pacific decadal oscillation (PDO), whereas that during negative phases of the PDO was only 0.12, which is statistically unsignificant (Fig. 1). Based on the summer circulation composite analysis of El Niño decaying years during different PDO phases, we found the stronger Indian Ocean warming in El Niño decaying-year summers for PDO positive phases in comparison to PDO negative phases is associated with enhanced convection and heating, which further drive a stronger anticyclone over the northwestern Pacific, leading to a stronger and more westward-extending WPSH, which is favorable for more heat waves over eastern China (Fig. 2: flowchart of the mechanism). The study reveals different impact of WPSH changes on the summer heat waves over eastern China during different PDO phases, which bears a scientific significance and application value for deeply understanding the variation mechanism of summer heat waves in China in the context of climate change.

The study was collaboratively finished by Academician Congbin Fu's research group, researcher Tianjun Zhou of the Institute of Atmospheric Physics, Chinese Academy of Sciences, and Professor Huiting Mao of State University of New York. Academician Congbin Fu is the corresponding author and doctoral student Qi Liu from School of Atmospheric Sciences is the first author. The research was supported by the Jiang Su Collaborative Innovation Center for Climate Change and the National Natural Science Foundation of China. 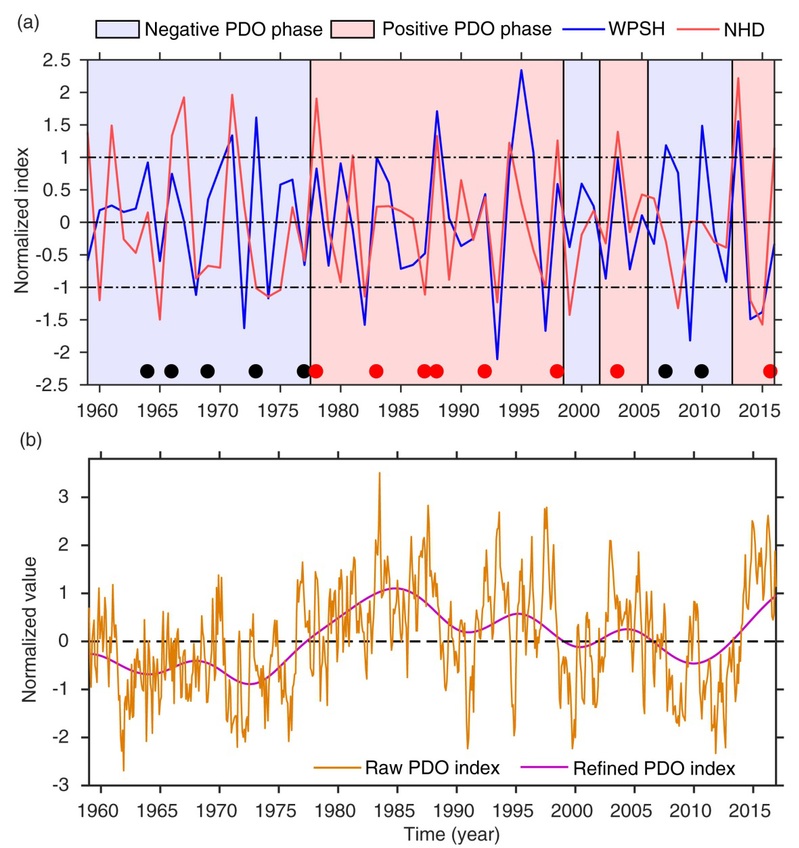 Fig. 1. (a) Normalized WPSH and NHD indices on interannual scales. The red dots and black dots represent El Niño decaying summers during the positive and negative phases of the PDO, respectively. (b) The raw monthly PDO index (orange) and the refined PDO index (purple). 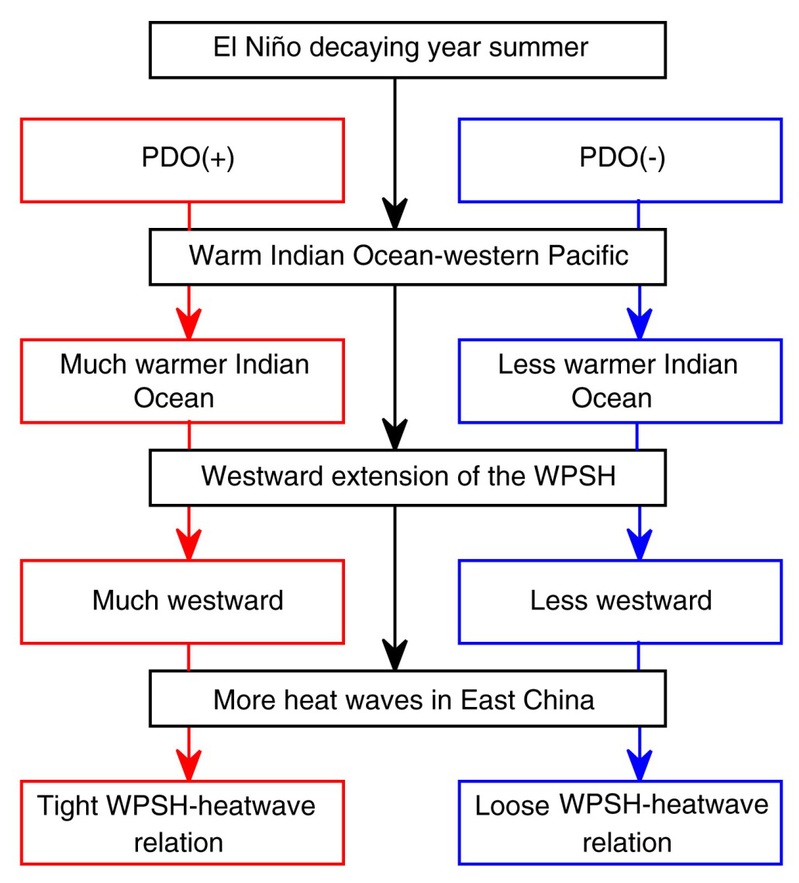