The concurrent variations of the East Asian polar-front jet (EAPJ) and the East Asian subtropical jet have raised concerns since they could result in severe weather events over East Asia. Recently, Prof. Yaocun Zhang's group has made a series of progress in the study of the winter concurrent shift of the EAPJ and EASJ, its possible mechanism, and its relation with the winter precipitation changes over Eastern China. These results have been published in Journal of Climate.

By reanalysis data and model simulations, the roles of the interdecadal Pacific oscillation (IPO) and the Atlantic multi-decadal oscillation (AMO) on the concurrent variation of the two jets are investigated. Results show that combinations of opposite phases of the IPO and AMO can result in significant shifts of the two jets during 1920–2014. This relationship is particularly evident during 1999–2014 and 1979–98 in the reanalysis data. A combination of a negative phase of the IPO (-IPO) and a positive phase of the AMO (+AMO) since the late 1990s has enhanced the meridional temperature gradient and the Eady growth rate and thus westerlies over the region between the two jets, but weakened them to the south and north of the region, thereby contributing to the equatorward and poleward shifts of the EAPJ and EASJ, respectively. Atmospheric model simulations are further used to investigate the relative contribution of -IPO and +AMO to the jet shifts. The model simulations show that the combination of -IPO and +AMO favors the recent jet changes more than the individual -IPO or +AMO. Under a concurrent -IPO and +AMO, the meridional eddy transport of zonal momentum and sensitive heat strengthens, and more mean available potential energy converts to the eddy available potential energy over the region between the two jets, which enhances westerly winds there. 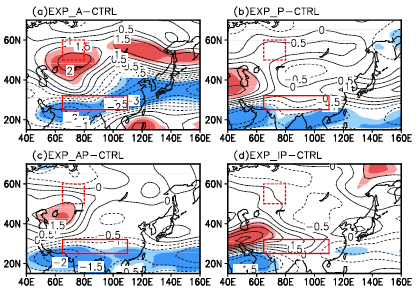 The group also found that Global-mean surface temperature has experienced fast warming during 1985–98 but stabilized during 1999–2013, especially in boreal winter. The winter precipitation has decreased (increased) over southern (northeastern) China from 1985–98 to 1999–2013. Winds at 300 hPa over East Asia strengthened during 1999–2013 around 30°–47.5°N but weakened to the north and south of it. This changing pattern caused the EAPJ and the EASJ to shift, respectively, equatorward and poleward during 1999–2013. Associated with these jet displacements, the Siberian high enhanced and the East Asian trough shifted westward. The enhanced Siberian high strengthened the East Asian winter monsoon and weakened southwesterly winds over the South China Sea, leading to precipitation decreases over southern China. The westward shift of the East Asian trough enhanced convergence and precipitation over northeastern China. These circulation changes provide favorable conditions for the northeastern-wet–southern-dry anomaly pattern during the hiatus period.

This series of studies discover that the concurrent variation of the EAPJ and EASJ can significantly affect winter precipitation over eastern China. Thus, studying the mechanisms for the jet changes is scientifically and practically important for us to investigate precipitation variability in eastern China and to understand its mechanisms. 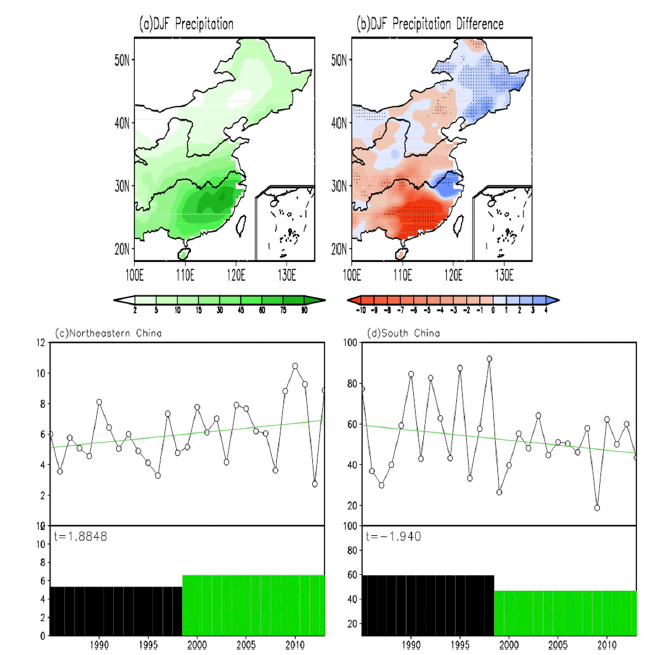 Prof. Yaocun Zhang's group and Porf. Aiguo Dai of State University of New York, University at Albany are all dedicated to this series of studies. Group member, Dr. Danqing Huang, is the first and corresponding author of the relevant two papers. The latest paper was completed during Huang's visiting in the State University of New York, University at Albany. These studies are jointly sponsored by the National Key Research and Development Program of China, the National Natural Science Foundation of China, China Scholarship Council and etc.

Recently, Zhang's group is moving forward on the study of the summer concurrent variation of the East Asian jets and the connection with different combinations of the IPO and AMO.