Relationship Between El Niño-Southern Oscillation and the Symmetry of the Hadley Circulation: Role of the Sea Surface Temperature Annual Cycle

The Hadley circulation (HC) is an important component of the three annual mean meridional cells and its variations can significantly affect global climate. Professor Zhemin Tan's group from the School of Atmospheric Sciences has made important progress in Hadley circulation study with a serial of papers published on the impacts of El Niño-Southern Oscillation (ENSO) on HC.

In their first paper, titled Relationship between El Niño–Southern Oscillation and the symmetry of the Hadley circulation: Role of the sea surface temperature annual cycle, which was published earlier in AMS's Journal of Climate, researchers revealed that the tropical sea surface temperature (SST) annual cycle has an important modulation effect on the relationship between ENSO and the asymmetric mode (AM) of HC.

Based on that, researchers investigated the sensitivity of the HC-ENSO relationship with various ENSO properties using the historical outputs from 17 CMIP5 models and found that the HC-ENSO relationship is most closely correlated with the zonal extent, which means a more westward extension of ENSO SSTA can lead to a closer HC-ENSO relationship (Fig.1). This finding indicates the importance of the ENSO zonal extent in climate models to accurately simulate ENSO pattern and promotes our understanding about to what degree ENSO events may impact the HC in a warming world. The results are published in AGU's Geophysical Research Letters.

The third paper was about the interdecadal strengthening of ENSO-HC relationship, which is referred to as the HC regime change (Fig.2). Previous studies suggested that HC regime change is a possible response to the equatorially asymmetric sea surface temperature (SST) warming over the eastern Pacific. In the new study, however, the authors further pointed out that the recent HC regime change may result from a combined effect of the western Pacific warming and increased ENSO amplitude in the last several decades (Figures 3–4), which could provide a new understanding for interdecadal changes in the ENSO-related climate anomalies in the 1970s. 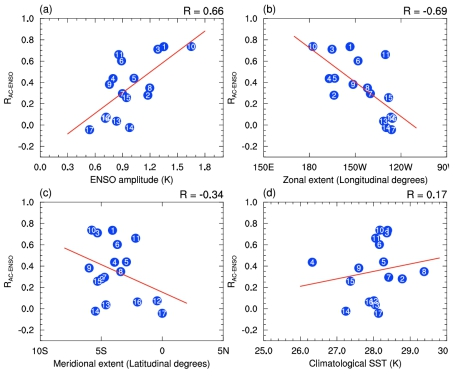 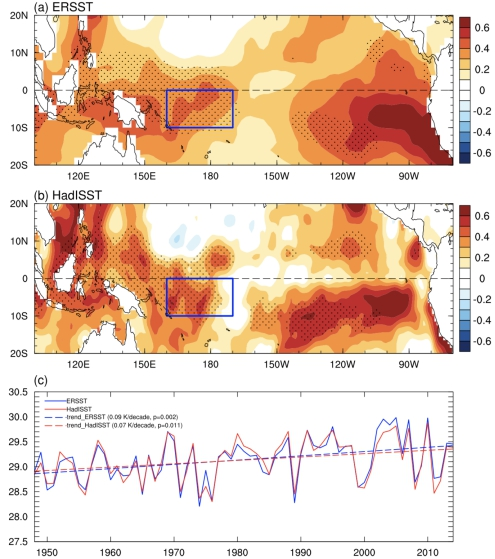 FIG. 3. DJF mean SST difference between 1979–2014 and 1948–76 based on the (a) ERSST and (b) HadISST datasets. The stippled areas indicate values exceeding the 95% confidence level. (c) Time series of the mean SST averaged over the blue box (108S–08, 1608E–1708W) based on the ERSST (blue line) and HadISST (red line) datasets. The blue and red dashed lines denote the trend lines based on ERSST and HadISST datasets, respectively. 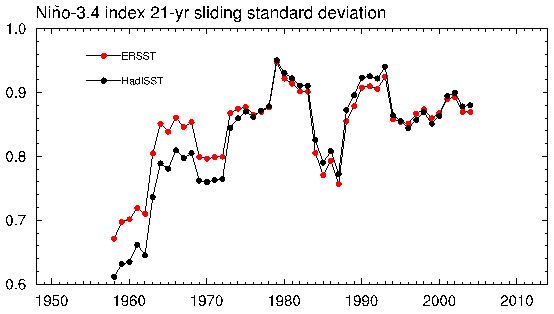